In this article, we will discuss acupressure points for relaxation and stress management, and the related set of techniques commonly called ‘Meridian Therapies’ and Energy Psychology techniques.

Use Energy Psychology to Lose Weight G Gach (1990) (see Bibliography) defines acupressure points as “places on the skin that are especially sensitive to bioelectrical impulses in the body and conduct those impulses readily” (p.5). Several thousand years old, Chinese Medicine (sometimes called ‘Oriental Medicine’) conceived of these points as junctures of special pathways (or meridians) that carry the vital life force or qi. When these points are stimulated, either manually (acupressure) or with needles (acupuncture), this assists the body in self-healing.

A report from a Consensus Development Conference on Acupuncture held at the National Institutes of Health (NIH) in 1997 stated that, according to their clinical evidence, acupuncture was considered to have potential clinical value for “nausea/vomiting and dental pain, and limited evidence suggested its potential in the treatment of other pain disorders, paralysis and numbness, movement disorders, depression, insomnia, breathlessness, and asthma”. Preclinical studies have documented acupuncture’s measurable effects, but they “have not been able to fully explain how acupuncture works within the framework of the Western system (italics mine) of medicine”.

The NIH proposed that acupuncture produces its effects by the conduction of electromagnetic signals at a greater-than-normal rate, thus aiding the activity of pain-killing bio-chemicals, such as endorphins and immune system cells at specific sites in the body. These particular studies only examined acupuncture, i.e., stimulation of the points with needles, and further studies are planned on acupressure, i.e., stimulation of the points manually.

There are several acupressure points on the body that are useful for calming stress and promoting relaxation, but I will discuss two common ones that can quickly be used, per Gach’s (1990) book, Acupressure’s Potent Points: A Guide to Self-Care for Common Ailments:

1. The Third Eye acupressure point is located between the eyebrows, “in the indentation where the bridge of the nose meets the forehead” (p.140). It is best to use the middle finger at the point and hold with gentle pressure for approximately one minute. It is recommended for “spiritual and emotional imbalances, headaches, and eyestrain”, among other things.

2. The Sea of Tranquility acupressure point is located on the center of the breastbone, “three thumbs widths up from the base of the bone” (p. 140). It is recommended to relieve “nervousness, anxiety, frustration, irritability, insomnia, and depression”.

A new set of psychological and peak performance techniques have evolved out of this Eastern theory of health and medicine. Collectively, they are commonly referred to as Energy Psychology techniques and ‘meridian therapies’ since they work with the qi that flows through the body’s meridians.

According to Dr. Callahan (see www.tftrx.com and http://thoughtfield.com/), TFT was discovered in 1981, when he had tried everything in his repertoire to help a woman with a lifelong, severe and apparently intractable water phobia.

He decided to try a variation on a holistic, mind-body healing method he had been studying, based on the theory in Oriental medicine that life energy or qi flows along meridian lines in the body. These meridian points appear to act as a governing force in healing and growth. He discovered that by directly treating the blockage in the energy flow created by a disturbing thought pattern, the disturbance or upset dissipates.

Callahan continued to expand on his discovery and has come up with a number of brief treatments or ‘algorithms’. Algorithms are step-by-step procedures or sequences of body taps on acupressure points geared to particular conditions which clients can perform on themselves. It basically works as follows. The therapist asks a person to think about a troubling situation or event and rate how uncomfortable they feel at the moment on a scale from zero to ten, where ten is the worst you can feel and zero is no trace of the problem. Then the client taps with two fingers on various acupressure points on the body, according to the prescribed recipe pattern (algorithm). The algorithm is based on the particular emotions elicited by the troubling event. After a series of tapping per the algorithm, the treatment is complete. Clients are taught to self-administer the treatment so they may create relief whenever needed.

For a detailed history and literature review of the various types of meridian therapies, see Gallo’s (1999) Energy Psychology: Explorations at the Interface of Energy, Cognition, Behavior and Health. An excellent self-help reference is Lambrou and Pratt’s (2000) Acupressure for the Emotions: Instant Emotional Healing. 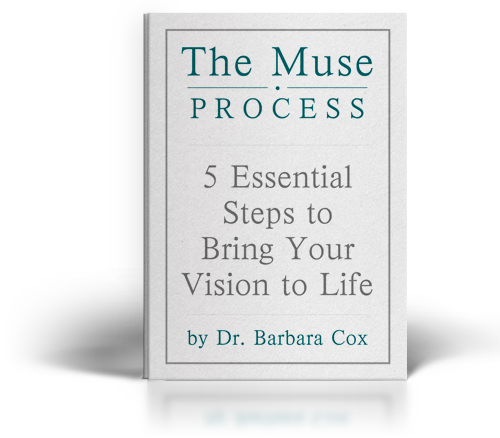 Get “The Muse Process: 5 Essential Steps to Bring Your Vision To Life” for FREE!
Just enter your email and I’ll send you my cutting-edge techniques to make your vision a concrete reality for you or your organization – absolutely FREE.