What Is Synchronicity, Really? 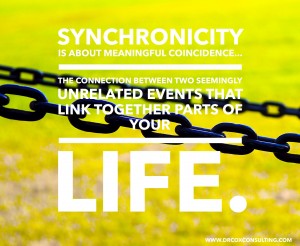 I’ve been talking about the concept of synchronicity a lot lately and how it supports our need to be in work that nourishes our pocketbook, our soul, and our community – all three. But I want to go deeper and make sure you all understand what synchronicity really is at its core…

What does synchronicity mean anyway?

You already know from this post that the term synchronicity was coined by Carl Jung. In essence, synchronicity is the acausal connection of two or more events. Jung’s development of this concept came to him as he was working through an impasse with one of his clients. Her exaggerated rationalism was holding her back from assimilating unconscious material that would help overcome her impasse and transform. One night, the client dreamt about receiving a necklace with a golden scarab on it – a cetonia aurata. The next day, during the session, an insect flew into Jung’s window. Jung caught it and discovered, surprisingly, that it was a golden scarab; a very rare presence for that climate and area. He handed it to the client and said, “Here is your scarab”.

Synchronicity is about meaningful coincidence.

In Jung’s case with his client, the meaningful coincidence was between the scarab in the dream the night before, and its appearance in real life, in the office. Notice, that this coincidence is not senseless, a simple coincidence. Jung realized the scarab’s archetypal association with death and rebirth. The client, through this process, experiences a ‘death’ of the neurotic part of her personality, which was causing her impasse, and a rebirth and revitalization of the helpful parts of her persona. Thus, a significant coincidence of physical and psychological phenomena that are acausally connected help a person become an even more functional member of society.

Now that you have a better understanding of synchronicity, see if you can find times when it shows up in your life!

Looking to unlock and unleash your innate feminine power? Check out The Muse Process, my new book that teaches women how to shift their mindsets – both on a collective unconscious level and the conscious level – to reignite their state of power and visibility for success and fulfillment at work and at home. Learn more at www.drbarbaracox.com.

Share this ArticleLike this article? Email it to a friend!
Email sent!